Are you an Early adopter? 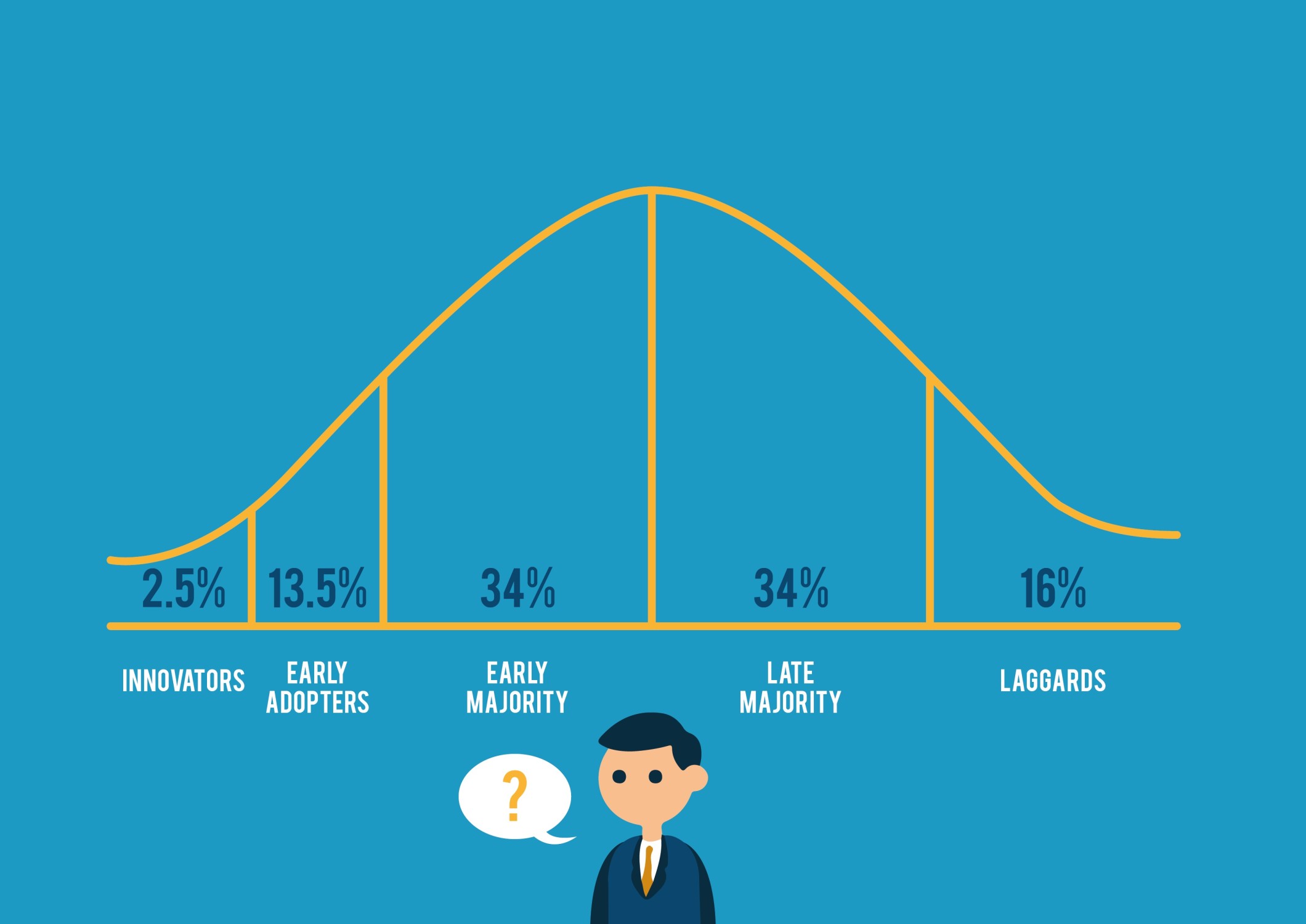 This adoption curve (a.k.a. the Rogers’ bell curve) shows the general distribution of when people and businesses start to adopt a new technology. Change and the unknown is scary to humans, and so when something is brand new, be that a new technology or a new way of doing something, understandably very few people or businesses want to be the first to trial it.

The Innovators are the brave first few. They are probably those in the inner circle, or close enough to the new technology to appreciate it. They may be more educated in the new concept that then rest of the people. Generally, they are pioneering-risk takers with a passion for exploration

The Early Adopters are courageous and daring with a great eye for spotting the beginning of a winning trend. They are keen to stay on the cutting edge so they know when a new approach is starting to gain traction and they can capitalize on the potential upswing.

The Early Majority is pretty much everyone else who can really benefit from the new idea, the rest of the target market. They still can get an advantage over the remaining 50% of the population who have yet to discover it

The Late Majority are slow behemoth organizations that only move because their institutional investors are peering intently over their shoulder. By this time, they feel more at risk not to be involved, as they may get left behind, or may already be behind. Or perhaps they are smaller companies with not enough resources to research market changes and may have only caught wind of the new technology from observing a competitor.

The Laggards are frankly the are the old-fashioned, stuck-in-their-ways companies, who refuse to move, they believe their old way will prevail. Think Blockbuster.

If you’ve never even heard the phrase RPA or Robotic Process Automation, you’re way behind many of your competitors.

It’s a sobering thought – especially if you’re in manufacturing, banking, insurance, healthcare or utilities (these were RPA’s earliest adopters). You’re even further behind if your company has lots of manually intensive processes, with a business model that is no longer scalable. Tell-tale signs are high attrition rates, highly frustrated employees, poor customer service, or large backlogs of back-office work which may be why you’re hemorrhaging clients and money.

However, if your company has started investing in RPA technology to automate your processes, this is great news! Your company can see the massive potential of getting a competitive advantage. As of this publication (2019) you’re probably at the latter end of the Early Majority phase. If you’re also leveraging Artificial intelligence (such as Intelligent Character Recognition, Machine Learning or Intelligent Chatbots), then you’re certainly in the Early Adopter camp, as your competitors will probably give it another 6–18 months to make this step.

You can learn more about implementing RPA (Robotic Process Automation) and intelligent automation at Leania.co. The virtual consultant

You can read about Lean IA’s trademarked AEIO YOU method in their new book Business @ the Speed of Bots, How to implement RPA that scales