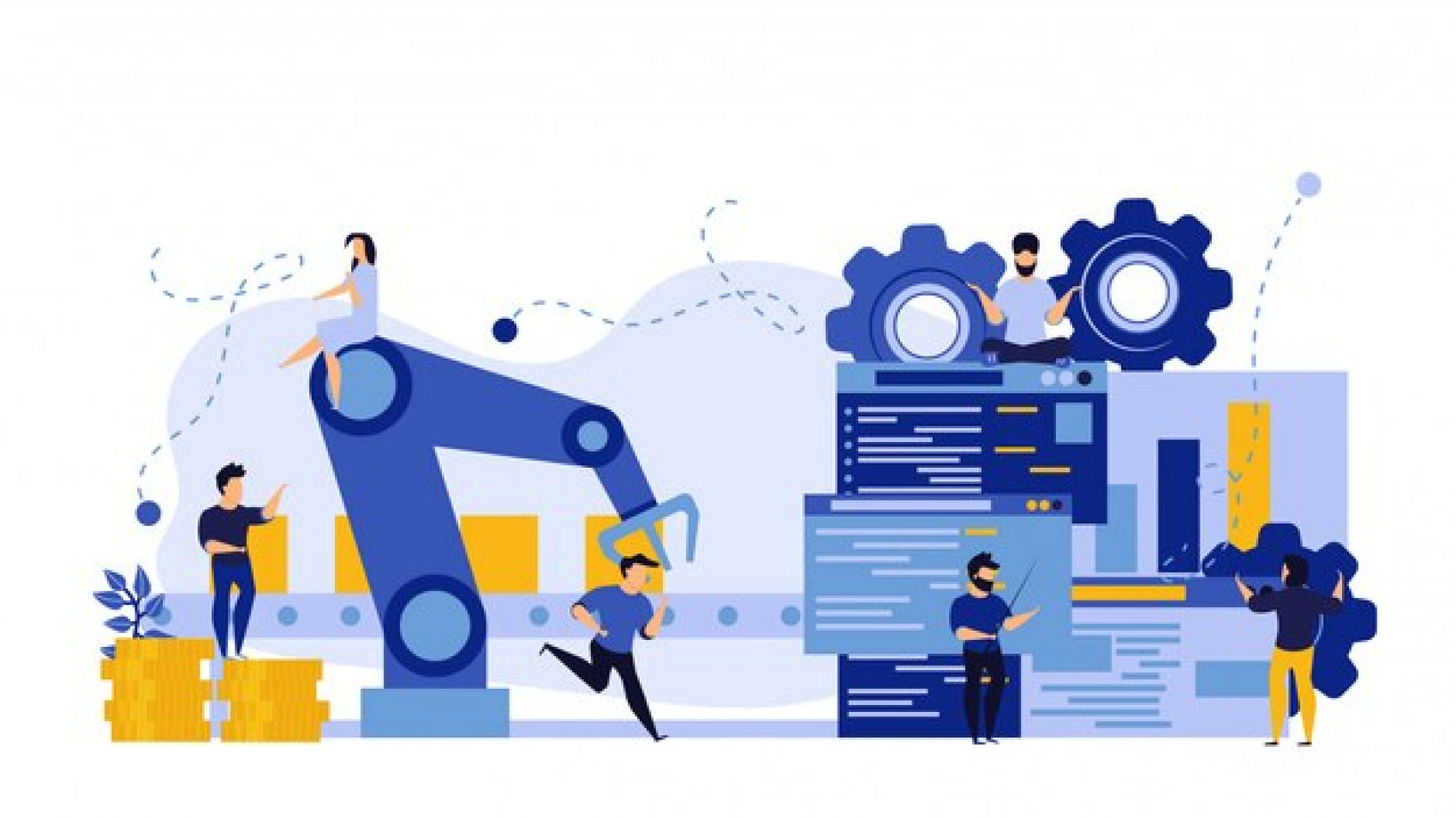 …that are causing teams 99 problems to digitally transform

“Transformation is a process, not an event” – John Kotter

If you’ve been involved with change management you most likely would have heard of these words – which are from the world-renowned change management and business thought-leader john Kotter, and he’s written several books on the subject such as his New York best seller “Our Iceberg is melting”. The essence of his message and approach to change still runs true in this new digital age, as I hope to show you today

With the tech trends of the last few years suddenly accelerated by recent global events –  it is becoming increasingly difficult to direct teams and strategize as the world becomes more digitally reliant without technological awareness steering the ship.

As technology begins to infiltrate every industry, market sector and every job, CIOs, as a Mckinsey article put it, need to “move from being a functional to a strategic business leader”. If a company does not have a CIO, the non-techie business leaders need to become more tech-savvy to navigate in the new technology age to leverage cutting-edge tech and create value.

There are common traps that business leaders who are new to automation technology fall prey to. These surprisingly common pitfalls and mistakes end up causing an array of consequential problems and challenges down the line – so I’d like to address this at the root from which most or all problems and pitfalls stem from

But firstly, robotic process automation (RPA) is functionally quite different to traditional software changes – firstly because RPA is strongly business led (mainly by the COO and the operations team). The reason lies in the history of RPA which was designed to put power in the hands of the business and alleviate pressure for the IT department. RPA allowed the business (with expert guidance and support) to implement solutions and navigate technical roadblocks of old legacy systems faster, in a couple weeks or months, rather than waiting on cumbersome technical changes which could take years.

The other difference is that RPA is used in a very new way to other software, because effectively RPA ‘robots’ are virtual workers who do specific menial tasks – repetitive and mundane processes like copy-and-pasting customer data from one system to the next, or processing invoices.

SO, WHAT ACTUALLY IS RPA

RPA is a software platform, alike a virtual worker, that can mimic any menial and repetitive tasks your staff do on their computer, as long as the process has a logic workflow, with rules-based decisions and it doesn’t require human intuition.

So no matter what type of business or industry you are in, if you have staff doing repetitive tasks, this is a waste of their time and intellect, and waste of your money – as an RPA virtual worker, costs one tenth the cost of a full time employee, doesn’t take breaks and can work 24/7,365

Intelligent automation (IA) combines automation tools like RPA with Artificial Intelligence to further enhance the scope of what your virtual workers can do, be that; reading emails, extracting information from scanned invoices or forms, or even replying to customer via a chatbot

This suit of powerful technologies can save vast amounts of time on menial tasks and unlock six, seven or even eight figure financial savings annually from your business, whilst also increasing speed, throughput, accuracy of service and improving compliance and customer and employee satisfaction.

Many business leaders in industries not yet on the forefront of automation do not feel that this is right for their business and this is fair to think as vendors have focused mainly on Finance, Manufacturing and Insurance industries. However currently about 50% of businesses have started to use RPA, though it is forecasted that by 2025 97% of all businesses will be taking advantage of this modern technology.

Further exploration on how businesses can get started with automation is covered in another article, however I’d like to draw your attention to one data point:

This is a concerning reality I have been investigating for several years now, as almost all businesses in a few short years will be utilizing automation and AI, but only 50% of their projects will succeed – so let’s take a look at common reasons for this

Where senior leadership teams are not fully aware of or can’t articulate what process automation is, it can be difficult for these innovative leaders to get their peers or seniors bought in. Furthermore, it becomes even more of a challenge to fit this into the corporate strategy and develop a roadmap for rolling this out enterprise wide

Leadership team that have a good and aligned understand of how robotic process automation and artificial intelligence (aka intelligent automation) should be used to transform the business and build centre of excellence teams to govern this will led in their market. Most businesses know that they need automation, AI, a chatbot and other buzz words to modernise, but not every leader truly understands how to leverage these in practice

2. Matching wrong technology to use case

“Easy when you know how”

choosing the wrong process for RPA or AI is by far the most common mistake we see businesses make in every industry, and it becomes an expensive PROBLEM, both in money, time and patience. Furthermore, it can result in projects being shut down, and then reopened a year later under new management. There’s also the cost of hiring external consultants to fix the issues and help teams unlearn bad habits – as well as re-gaining commitment from frustrated stakeholders

Identifying automation suitable processes is really quite straightforward when you have a tried and tested method for identifying, assessing and implementing processes. Having a data-backed approach and mechanism is a logic challenge against certain politics and influences and ‘teams who shouts the loudest’. It’s a challenge I’ve come up against many times however by using business data and a scientific approach it was much easier to persuade stakeholders on the best course of action

“Your most valuable assets – your staff”

Implementing process automation to save hours and days of menial tasks from your employees working lives may sounds good financially, but actually can sound very daunting to employees, as it can stinks of replacement and redundancy. Poor (or lack of) communication from the business is the reason for what is by far the biggest cause of RPA and AI project failure – staff resistance to change

Staff need to be empowered with the know-how and the understanding that technology as always is here to augment our work so we are more productive. Teams need to b shown that the benefits of automation means less late nights trying to meet deadline, better job satisfaction due to doing more creative and human-to-human work instead of tedious, repetitive, mind-numbing tasks.

Granted, it would be naïve to believe that no staff member will become redundant or lose their jobs. As an analyst for many years, I have repeatedly heard that analyst roles were most likely to go as they were highly logic and methodical– perfect for automation

However, for societies and businesses to advance, old jobs (just like old business models) that no longer work will need to be modified to those that do. And having a training plan for employees serves everyone two fold.

1 – employees are upskilled and trained to do their job in a new way or do newly created jobs, or staff are re-deployed into different teams that are growing

4. Lack of time and commitment from SMEs

Stakeholders of RPA projects generally have unrealistic expectations as they believe implementing automation is a lot faster and simpler – but unless they’ve been made aware, they wouldn’t know what actually goes into automating a process.

Process owners and subject matter experts are who automation teams interact with the most to identify the problems, design, build and test the solutions. As they play such a central role it’s imperative that they and especially their managers understand at a high level the general process for delivering automation, as the project will literally live or die with them. They hold the knowledge of the process, the have the access to the process data.

What I’ve witnessed and heard from peers is that team managers (either un-informed or resistant to change) will dedicate an hour or two of one or two SMEs initially but then re-deploy them back into Business-as-usual work and have limited availability and put it as low priority going forward – again RPA is a fairly new concept and stakeholders must be shown that these changes is a process, not an event

“Garbage in, garbage out”

There seem to be two schools of thought in RPA. Roll out automation quickly, leaving the processes as it is. This immediately positively impacts the bottom line with financial savings. However, re-engineering a process to optimise it first doesn’t speed up a bad system (which could put immense strain on bottleneck or result in an unstable robot), but provides a better return on investment and gives you a more robust bot due to a simpler process

Lean thinking is a great combination to RPA and AI, as many companies are starting to form Lean teams in tandem with their RPA team.

These 5 key mistakes cause hundreds of problems and can be boiled down to these 3:

Businesses failed to transform their automation plan because: 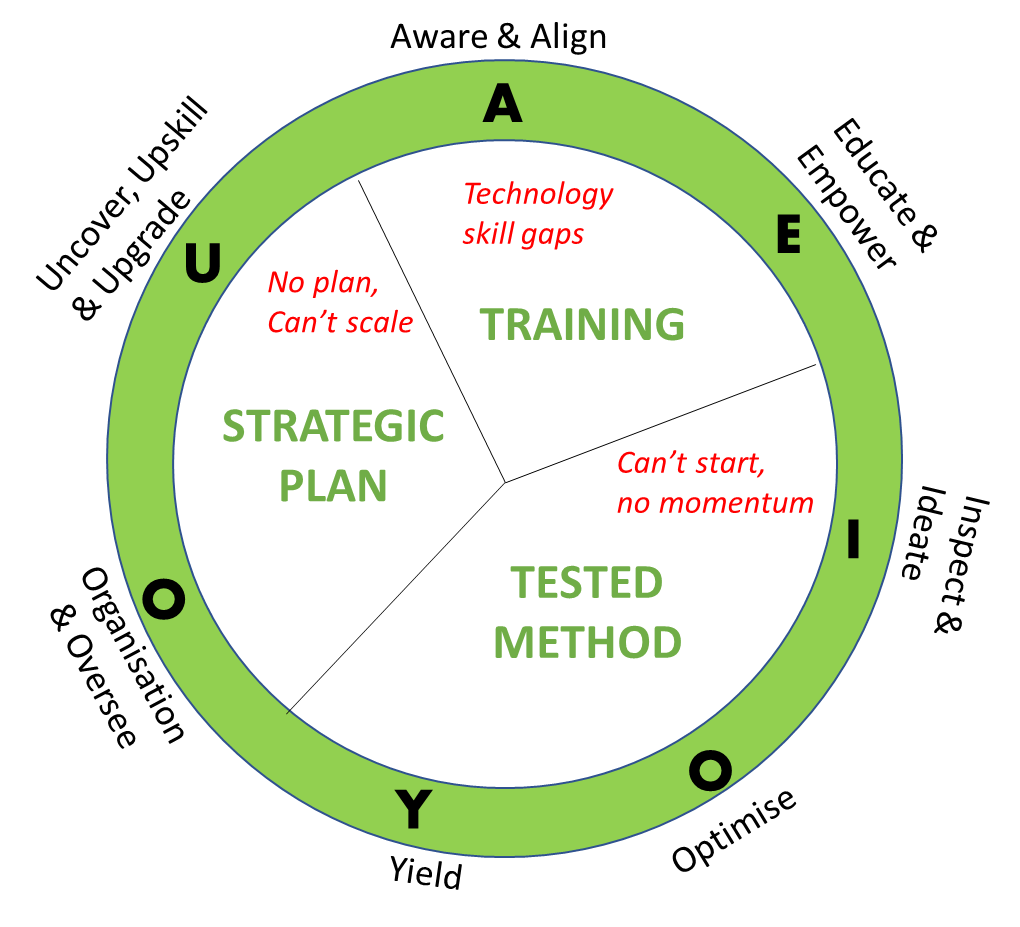 Problem 1: Can’t start, No momentum:
1- Why couldn’t teams get started?

Because they didn’t create a repeatable formula

2- Why didn’t create a repeatable formula?

Problem 2: Technology Skills gaps:
1- Why did these companies have skills gaps?

Because they didn’t educate their core delivery team and stakeholder teams uniformly.

2- Why didn’t they educate their team?

Because they didn’t have a comprehensive training plan

Problem 3: No Plan, Can’t scale.
1- Why didn’t they have a clear enterprise plan for RPA?

Because they didn’t have an automation strategy

2- Why didn’t they have a strategy?

We believe that in this new age, business leaders who empower their workforce to augment themselves and keep discovering new technology will achieve full digital transformation. Our training package is helping businesses solve these root causes and overcome common problems.

You can contact LeanIA to request a seat on their webinar series “Leaner, Faster, Agile” to discover what you’ve been missing out on.